Janey Buzugbe faced challenges she wasn’t prepared for as an immigrant. So she started a business to help fellow newcomers.

With a Master’s Degree from the Smith School of Business, Janey helps people immigrating to Canada. 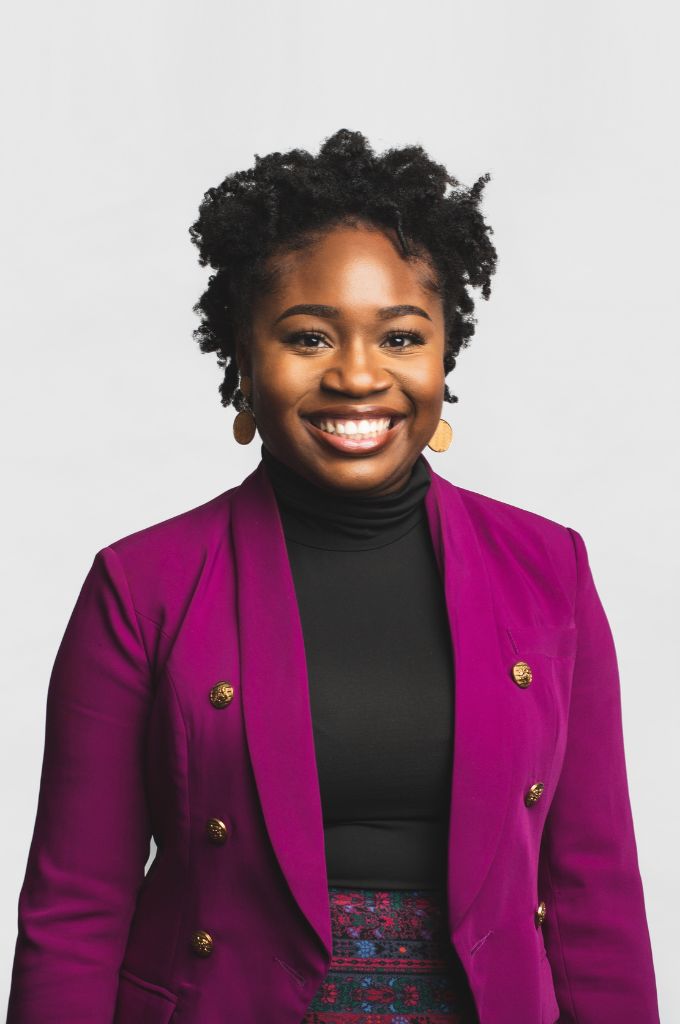 In 2015, Janey Buzugbe arrived in Canada from Nigeria with two suitcases and a dream.

With a background in network engineering and a degree in information technology, she was looking to further her education in a new country and build her career. But adjusting to the new cultural environment she found herself in, as an international student at Humber College in Toronto, proved challenging.

From transportation services and telecommunications providers to the banking system and student financial assistance, there was no shortage of topics to research, analyze and compare. She also faced rejection and barriers, often due to misconceptions and unconscious biases.

“I learned pretty quickly that I’m one tough cookie and I don’t crumble easily,” Janey says.

The challenges she faced inspired her to start a YouTube channel where she shares advice and resources with other newcomers. Today, Janey Buz (Janey of Canada) has nearly 18,000 subscribers and her videos reach hundreds of thousands of immigrants and students looking for help navigating the intricacies of Canadian life.

“I started my channel to help others having similar experiences,” she says.

After completing two post-graduate certificates at Humber — in advertising media management and account management — Janey set out to secure a job in digital media. But she found that she was being passed over for roles either for not having enough Canadian work experience or for appearing overqualified for certain positions.

Undeterred, she took her career into her own hands and started a small business — a line of organic body butter. It was in the process of learning how to scale that business that she decided to apply to the Master of Management Innovation & Entrepreneurship (MMIE) program at Smith School of Business, Queen’s University.

“My friends described the MMIE program as an MBA without suits, where you get to have fun — and that was very appealing to me.”

“I’ve always been someone who goes for the best. I finished high school at 14, completed university in five years, and graduated top of my class. I decided that a master’s degree was the best, but I wanted to learn practical skills rather than theory. My friends described the MMIE program as an MBA without suits, where you get to have fun — and that was very appealing to me.”

Janey says she learned from other students that Queen’s has a strong brand and alumni network, which she believed would be beneficial to her as a new Canadian. So, in 2017, she moved to Kingston from Toronto — taking several jobs to pay off her loans while also being a full-time student.

But moving from Canada’s most populous city to one a fraction its size was a wake-up call for Janey. “It was in Kingston that I first realized that I was Black,” she says. “In Toronto, I was a Nigerian woman in a city with every type of person from all walks of earth. But when I got to Kingston, I didn’t see a lot of people like me. I learned that racism and bias do exist in Canada, and though it may look different than it does in the U.S., it’s still present.”

From all these experiences — and the questions and feedback she was getting through her YouTube videos and coaching — an idea for a business began to take shape. Janey realized many skilled immigrants arriving in Canada don’t have access to the communities or networks they need to succeed. They don’t know how to access long-term employment or aren’t given opportunities to enter companies at the level of their expertise.

“There is a general lack of acceptance and recognition of foreign education and work experience, which stunts the success of immigrants.”

Enter Immiducation, an immigrant and career education network created to combat under-employment among Canadian immigrants. Janey notes that while immigration policies and programs make it possible for skilled professionals to migrate to Canada, newcomers face significant barriers to navigating and integrating into the Canadian workplace.

“There is a general lack of acceptance and recognition of foreign education and work experience, which stunts the success of immigrants and creates an obvious divide between the immigration efforts of the government and the realities for professional immigrants,” she says.

Targeting skilled immigrants who government programs tend to overlook, Immiducation has gained traction quickly, providing access to learning resources, mentorship and community. Until recently, Janey built this social enterprise as a side hustle. But as of August, she’s been able to run the business full time.

Janey wants Immiducation to be a resource and community for thousands of newcomers to find equitable careers that match their skill sets and education. “One thing I learned during [the MMIE] program is that resources and help are always available… if you don’t have [them] you’re just not yet connected to the right people,” she says.

Janey’s work at Immiducation extends to corporate Canada, where she helps educate companies on ways to attract, retain and promote diverse employees while gaining access to a pipeline of immigrant professionals.

“Having worked as a hiring manager, I know some companies see hiring newcomers as high risk,” Janey explains. “But what if you see the possibilities instead? That these individuals are risk-takers, they’re scrappy, they’re good at research and asking questions and have just navigated one of the most challenging tasks of moving to and settling in Canada. I want these organizations to see the untapped talent they’re missing out on.”

While Immiducation is still in a pilot phase, the company is growing its partner base and now has a team of four “all amazing, immigrant women,” Janey says.

Looking back, she is filled with gratitude for her experiences and the inner strength she summoned when things got tough. She reminds other newcomers that it’s never too late to pivot. If you remain open and ask for help, you’ll often be surprised by the opportunities that arise, she says.

“Go where you’re celebrated,” Janey says. For her, that meant moving around a lot and leaving jobs where she didn’t feel valued or respected. While that can be hard, she believes it’s part of being the CEO of your career. “Never settle. You’re braver, stronger and smarter than you think.”

Interested in learning how to become an entrepreneur while holding down a full-time job? Check out the Smith Business Insight webinar, Making the Side Hustle Work.
Most Popular