How role models can help shape a successful career — regardless of the industry.

A conversation with Indira Moudi, co-owner and CEO of Viandes Lafrance in Shawinigan, Quebec. 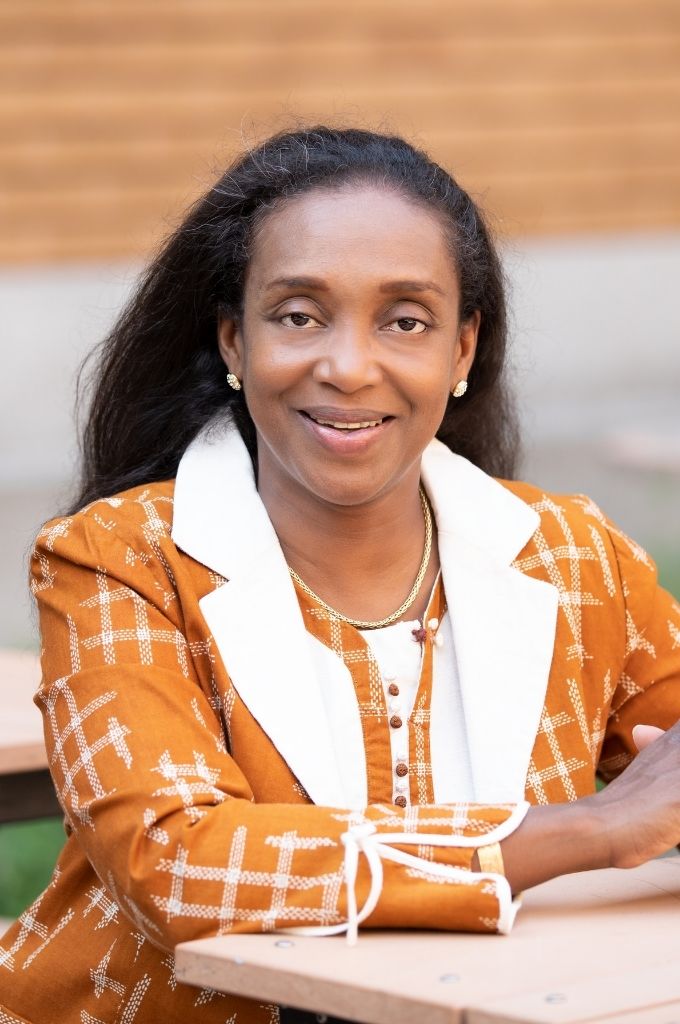 Many entrepreneurs gain the knowledge they need to launch their business by first working in the field for someone else. Indira Moudi, a long-time client of BDC, took a very different path. She has had very successful corporate and entrepreneurial careers —in two wildly different industries.

Graduating with an Industrial Engineering degree from Polytechnique Montréal, Indira started as a field engineer in oil and gas and worked her way up into executive roles, ultimately becoming a regional president with Baker Hughes, one of the world’s largest oil field services companies. During her 20-year career in the energy sector, she lived and worked all over the world, including cities in West and Central Africa, Europe, the United States, Canada, and India.

Her next chapter brought her to Shawinigan, Quebec — a 2-hour drive north of Montreal, or south of Quebec city — where she settled in to run Viandes Lafrance, a food processing business she acquired in 2012 with her husband, Dr. Guillaume Pham. Indira is CEO and chair of the business, which does share one notable similarity with the energy sector:  both industries are dominated by men.

Indira has worked hard to change that — as a role model and a leader. She helped to recruit and advance young women engineers and technicians in the energy field,  and with her own business, she’s purposefully built up her workforce to be 20% women.

She joined me recently to talk about her unique story, and the role models that helped shape her own career journey — inspiring her to take on new challenges, learn new things, and support others along the way.

It’s fascinating that you went from being a globetrotting executive in the energy industry to the owner of a food processing SME  in the Quebec countryside. How did that transition happen?

At 18 years old, I told my mother that I will own my own company, and this is the main reason for studying Industrial Engineering at Polytechnique of Montréal. It’s no surprise that after five to six years of working for a corporation, I had been thinking about running my own company.  At first, I thought I’d like to have a start-up. In 2004, while working full time, I launched African Suppliers, which provided expertise in Quality Control, HR, and Project Management to African companies. What I found was that things weren’t going fast enough for me, and I realized that by acquiring an existing company, I could jump right in and get going more quickly.

In 2008, I actively started looking for business opportunities. I came to Canada with my husband, and we visited about 15 companies in the Mauricie Region in Québec, through the SADC (Société d’aide au développement des collectivités). I had decided that I wanted to have kids in my 40s, and my husband and I wanted to have our kids in Canada. I knew I wasn’t picky about the sector; I didn’t want anything too small, and I wanted something that would challenge me.

After years of looking, the opportunity came up in 2012 for this family business that was in good financial health with competent owners. The market — meat production — was growing, and while we didn’t know anything about the agri-food industry, we felt really good about the opportunity. We really hit it off with the company’s owner, who we are still very close with today, and we made an offer.

“That was one of the busiest years of my life. In the span of that year, I gave birth to my first child, acquired the company, and started in an executive role as President of Central Africa with Baker Hughes.”

So, was that it? You left the energy sector  behind and started to run Viandes Lafrance full time?

Actually, no. That was one of the busiest years of my life. In the span of that year, I gave birth to my first child, acquired the company, and started in an executive role as President of Central Africa with Baker Hughes. In the energy sector, this job with Baker Hughes was one of the summits of my career, and it was impossible to turn it down. My husband said to me, ‘My dear, you are a career woman, take the job and I’ll run the business.’ So, we did that in parallel for a few years.

During that year we had a lot on the go, and I honestly couldn’t have done it without the help of my family. My parents, both young, retired medical doctors, helped me with the baby while I went to work. I have seen my mum  working and raising a family, and I knew I could do both, thanks to the wonderful role model I had in her. Both my parents, in fact, have always been role models to me.

It’s wonderful to be able to grow up with strong role models in your own home. Outside of seeing that balance of career and parenting, are there other things you learned from them that impacted your own path?

Absolutely. I was born in Algeria, the second of three daughters, but I was raised in eight different countries. It wasn’t until I was 16 that my sisters and I settled in Montreal — but my parents continued to travel for work. I had roots in so many different countries that I was never afraid to move around, taking on new challenges, learning new things wherever I went, or embracing diversity.

My parents both had leadership roles in their careers. They understood my drive and ambition and supported me along the way. That definitely had an impact. My first job was as a field engineer in Nigeria with Schlumberger, a multinational tech company working in the oil and gas sector — and within three years, I had moved into a managing role in Gabon.

My oldest daughter is studying Engineering and I’m surprised by how few women are in the program, even today. I can imagine when you were starting out, in the late 1990s and early 2000s, it was even more male-dominated?

Yes, but the global energy sector was very conscious about the need to attract more diversity into the field. The sector in particular was booming, and Schlumberger was quite forward thinking when it came to recruiting and training women. In fact, in 2002, I was sought out to work in Schlumberger’s HR department in recruiting, with a mandate of looking for more people like me. That job took me to Paris —where I did meet my life partner — and during those years, I was able to hire, with my team of 12 recruiters, more than 3,000 new recruits a year for the company.

“During my career in the energy sector, there were many people helping move women leaders forward, and then it was our turn to do greater things — to develop other women and be role models for the next generation of women in the industry.”

That’s impressive! I imagine with your own success, you were a very relatable role model for the women they were hoping to attract.

Yes, and I felt it was my duty to be that role model. During my career in the energy sector, there were many people helping move women leaders forward, and then it was our turn to do greater things — to develop other women and be role models for the next generation of women in the industry.

What about in your current role, in yet another industry dominated by men?

I have the same dedication. As a woman and a minority in Shawinigan, I believe it’s my responsibility to pave the way for others. I didn’t get to where I’m at today without help and support, and the more I help and mentor others, the more fulfilled I feel. From helping daughters of my friends who are pursuing an education in engineering, to mentoring my team at Lafrance, or participating on panels or in events, I’m always giving time to others.

And it goes beyond gender. At Lafrance, we have not only increased the representation of women in our workforce to 20%, but we also went from one nationality in the company when we started, to 12 today — and we only have a staff of 40 people. I can tell you that creating a diverse company isn’t the easy path — finding the right people and getting everyone to understand each other and work together takes courage and patience — but it’s been the right move towards prosperity and inclusion.

With all your experience, what advice do you offer other women who want to follow you on a similar path?

The advice I offer other women is the same advice I give my own kids — when you fall down, stand back up and move on, with courage and resilience. Dream big and go after your dream.

Also, I believe it’s important for women to know that the time for burnout is over. I’ve been able to have this whole career without burnout, and that’s because I’ve taken time to take care of myself — physically and mentally. I ask for help and accept help, because none of us can do this on our own. Especially if you want to focus on your career, have a family, and raise a child, having the right help and support in place is essential.

As a career woman and mother, another thought I want to share on motherhood is this:  We are moms not because we gave birth, but because we take care of children. Many children in this world have parents that are absent from their daily lives, for whatever reason; for me, it is a grace to have nephews, godchildren, and family or friends’ children that we can take care of, who consider us mothers or aunts. In some African or Indian cultures, for example, it is very natural to raise a kid that does not belong to you. If during our career as women, we cannot give birth for whatever reason, the avenue of taking care of other children is really fulfilling in life. My father has always said that we are not made only from our parents, but with the help of our teachers, neighbors, and community. It takes a village to raise a child.

I consciously chose to have kids in my 40s because I wanted to focus on building a career, and also I wanted to be in a position to give quality time to our kids. My dad always said, ‘Travel far, but do it while you’re young.’ And he was right. Most recently, I’ve been happy to slow down a bit, to run Lafrance here in Québec, and raise our two children. My next chapter is all about giving back, sharing my expertise as a global leader, and inspiring the upcoming generation. We must leave a better world for our kids, and this will be done by leading by example while being responsible.

As Vice President, Client Diversity at the Business Development Bank of Canada (BDC), Laura Didyk is leading the bank’s efforts to understand and address the challenges faced by underrepresented and underserved entrepreneurs. You can learn more about Laura, meet her team, and find her interviews with entrepreneurs and more on her Perspectives page.
Most Popular